I haven’t been a scout for very long. To be honest, it took me forever to pluck up the courage to join. My mom always tells me I’m too timid for my own good… and she’s probably right because when I finally feel brave enough to sign up for something, I usually really enjoy it.

She always makes me go to everything twice, because the first time I go, I’m always too nervous to speak to anyone. I get tongue-tied and embarrassed and have a pretty lousy time. The second time is always better. Then I can’t remember why I was ever worried…

It was like that with the Scouts. The first meeting was horrible, but now I love it. I’ve made amazing friends and learned all sorts of useful skills.

The Scoutleaders are great. They know everything about everything. My favorite is Scoutmaster Dietrich. He’s really tall and really kind and really fast at tying knots! The problem is that I don’t think he knows my name!

I’m not one of his favorites. He keeps taking the same few boys on hikes and missions. And every time I’m not picked, I feel this pang of… I dunno, like jealousy, I guess. I’ve tried and tried to get him to notice me; to look smarter and work harder than the other boys. I’ve earned a stack of badges in almost lighting time… But he’s never picked me.

We came out to the woods for a three-day camping trip. As usual, Scoutmaster Dietrich selected the same two boys for one-on-one activities and, as usual, I felt invisible. But one night, as we were sitting around the fire, I kinda caught him looking at me. I looked back and he held my gaze, and it was really, I dunno… intense. It was like he was looking into me. I can’t really explain it. It made me blush. Every time I looked over, he’d catch my eye and sort of half-smile…

The next morning over breakfast, he made an announcement. He said he was off to collect firewood, and then he looked right at me; ‘Jack, isn’t it? Do you want to join me?’

Of course, I immediately got all tongue-tied. I guess I was a bit shocked that he suddenly knew my name, but most of all, I just felt really excited that he’d chosen me to help him. I nodded and made weird noises. I don’t know what came out, but the others laughed and I felt like a prick. Dietrich laughed as well, then gestured at me to follow him…

We walked a long way. I kept seeing bits of wood which I thought would be great for the fire, but we didn’t seem to be collecting anything.

At one point he stopped and told me he needed to pee. Then he disappeared into the trees. I genuinely don’t know what came over me, but I had this overwhelming urge to see how big his penis was. I guess I just wondered if someone that tall would have, you know… a particularly big one!

So, I crept into the trees, thinking that if Dietrich noticed, I’d tell him I needed a pee as well. He was standing next to a tree, but I couldn’t see what I wanted to see so I got a little closer, which, of course, was a massive mistake. I stepped on a branch which made a huge cracking sound. He spun around and I was mortified…

He didn’t actually seem that bothered. In fact, he just laughed and told me if I wanted to look, I needed to come closer. I couldn’t tell if he was serious, so I just stood there, frozen to the spot. He smiled again and said ‘come on…’ so I just sort of shuffled over.

So I gave it a squeeze and he smiled, then said, “well it’s only fair I get to see yours now…” And then I felt all embarrassed again, assuming it was some sort of trick. But he was smiling and everything seemed pretty cool, so I unzipped my shorts and pulled it out, wondering what the hell the other scouts would say if they saw us.

Then he reached over and touched it and I held my breath because it felt really good. So I touched his again, then held it like he was holding mine.

I could feel he was getting hard, which made me get hard. My head was spinning. I had no idea really what was going on, I just knew it felt… nice… Better than nice… amazing. He started stroking his thumb over the head, which made me gasp then get so hard I thought it was going to explode.

All these weird thoughts started coming into my head. Real dirty thoughts. I could smell Dietrich’s scent. It smelt so good. It made my head go all funny. Then I started to feel something in my stomach. Something which made me want to do more stuff with him…

He kept looking at me and smiling, and every time he smiled, my penis sort of throbbed. I was aware that he was very strong and incredibly tall and that I was kinda powerless to do anything other than what he’d decided we were gonna do, but, for some reason, I liked that feeling.

I wanted to touch more of him. I wrapped my arm around his big strong shoulders while he did this crazy thing where he licked his finger, then rubbed it on the head of my dick. It made my knees buckle!

I suddenly felt entirely out of control. My heart was pounding. I wanted to rub my entire body against him.

He told me there was something he wanted me to do for him and then he sort of stuck his penis near my face and told me to suck it. I asked if he was sure, and he sounded kinda impatient all of a sudden, so I put it in my mouth.

I actually put it in my mouth. I’ve never done anything like that before. I could sense him sort of thrusting himself towards me as I did it, so I just started sucking harder and hoped what I was doing was okay. It tasted strange. Sort of sweaty, musky… but I liked it, even when he grabbed the back of my head and I thought I was gonna choke.

He asked if I’d seen another man hard before. I lied and said I had. I could hear him unzipping his shirt, then I could see his stomach, which was all muscular and rippling… like some kind of film star!

Then he grabbed the back of my head real hard and his dick went right into my throat and I started choking but he held it there. It was a little scary because I couldn’t breathe and also kinda embarrassing because, when he pulled out, all this saliva was coming up uncontrollably. My eyes started to water. I swear I wasn’t crying, but he thought I was, so told me not to.

His dick was so large. It felt like it got bigger every time he pushed it into me. He slapped my face a little and pulled my hair, but told me I was doing a great job, which made me proud.

He told me to look up at him, and he wasn’t smiling anymore. He was gritting his teeth and had a serious look about him. I thought he was angry but he slapped my cheek and said ‘good boy…’ and although everything was feeling really weird, I still felt proud.

He pulled me to my feet and turned me around telling me to put my hands against the tree, almost like he was a cop and I was being searched. He slapped my ass, then got down on his knees, parted my cheeks, and suddenly stuck his tongue into my hole.

I didn’t know what to think or do. It ought to have felt weird and invasive, but he made it seem sexy somehow. It was so intense and amazing that I started swearing. I never swear but it was like my whole body needed him.

I sort of knew he wanted sex. I didn’t know how he was going to do it or what it would feel like, but I knew he wanted to put his dick into me. I don’t know what came over me but it was suddenly all I could think about. I could hear him spitting into me and could feel myself twitching and opening somehow as he made my hole wetter…

Then he stood up and it started. I could feel him lining his dick up with my hole. I instinctively knew I needed to stay relaxed, so held onto the feeling that I’d had when his tongue was up there. He asked if I wanted it, and all I could say was “I do, yeah…” I was shaking. I was so nervous.

Then he started to push into me. It literally took my breath away. It was all a bit of a blur, but I remember a sharp, intense pain… like I was splitting in two. But he was encouraging me and telling me I was doing a great job.

I could feel him creeping further in. Every time I thought he must have got it all the way in, he pushed it deeper into me. I couldn’t work out where it was going inside me. At one stage I wondered if I’d feel it pressing against my belly button from the inside!

Then he started rocking… you know, going in and out, at all sorts of different speeds. He put his hands on my shoulders and really started going for it; very fast, and so deep inside me. I could hear his heavy balls slapping against my thighs.

I felt at one stage that he was actually trying to hurt me because he was slamming into me with such force, but then I realized I wanted him to do it like that. In fact, I wanted it harder.

He pulled my hands behind my back and locked his arm into mine so I couldn’t move. Then he put his hand over my mouth and told me he was gonna fill me up. I knew what he meant by that and I wanted it. 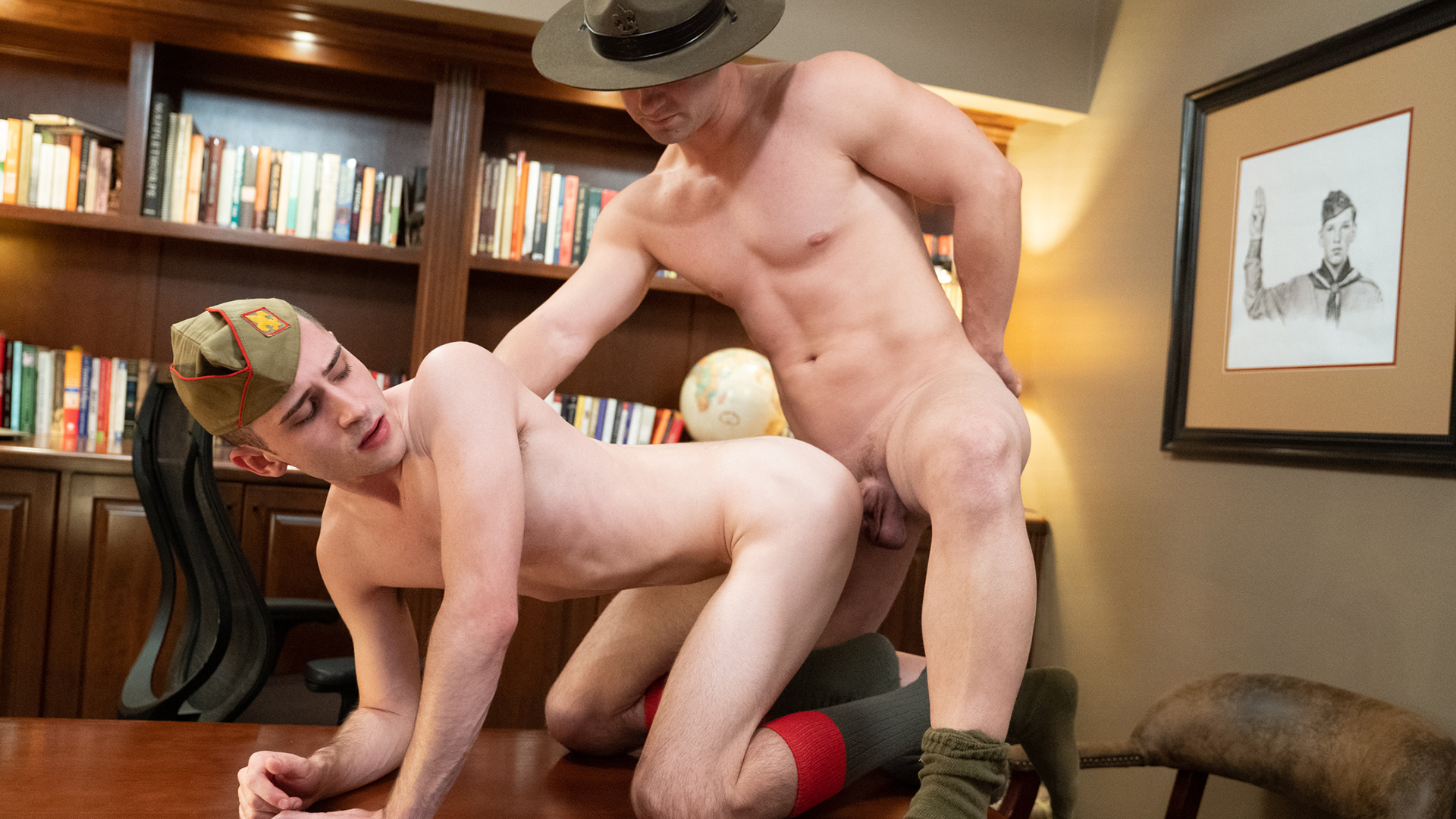